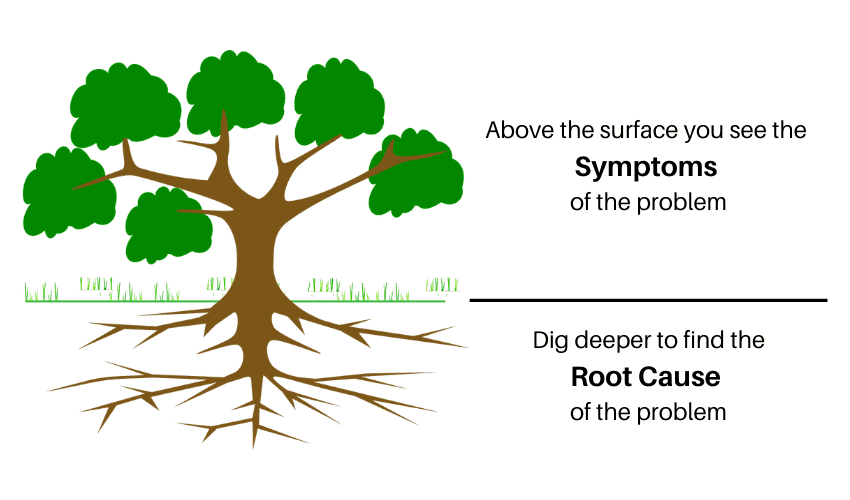 A Root cause analysis is revealing and inspiring

Almost everyone will agree with the saying that you have to tackle problems at the root. However, the logical analysis which reduces consequences to causes and ultimately the `root cause’, is not widely applied.

We like to start a collaboration with a root cause analysis.  The result is, in the words of one participant, inspiring. It is revealing to reduce your organisation’s problems and challenges to a logically coherent total overview of causes and effects. And inspiring, when it turns out that in this way you can tackle problems at the root and achieve goals faster.

Below you can read how it works.

Most organisations have no shortage of problems and challenges.  Managers who tackle problems one at a time are unfortunately doomed to fighting a running battle. Unknowingly, they are led by the whim of the day and often find out that their improvement initiatives get bogged down.

It is logical that improvement initiatives not preceded by a root cause analysis get stuck sooner or later: as long as the root cause is not found, the problems will be returning. You then fall into the trap of treating symptoms or fighting a running battle.

When the root cause has been identified and fixed, you´ll have more time for essentials.

We cannot tell you here the main problems of the organisations we work with. What we can say in general terms is that common causes are that projects and improvements take longer than planned and that innovation portfolios deliver too few successes.

Naturally, organisations concentrate on solving the problems that get in the way of their goals.  But problems are not root causes, usually, they are the visible symptoms in the diagram of the tree above.

A root cause analysis clarifies the connection between visible symptoms and root causes. Once these are clear, you can tackle the root causes of the problems.

We have an approach that allows you to make a logical analysis of key problems, symptoms and root causes. We bring in the methodology that allows people from your organisation who know the situation well to describe the logical connections. As mentioned, the result is inspiring: an overall picture of the main problems, symptoms, causes and a root cause. With the resulting insights, you can remove the breeding ground from which most problems in your organisation originate and stop fighting running battles.

We are experts in Flow

Someone we have worked for once spread his arms and sighed, “You try to get everything moving forward, but it’s sooo slow!” When the root cause is found and solved, everything moves much faster.

When the root cause has to do with too little flow in project and innovation portfolios, we can help further with flow techniques. Flow techniques transform your organisation from a situation where people are busy doing too many things at the same time, to one where they do more in the same time period… That sounds paradoxical. Indeed: a paradox is an apparent contradiction, not a real one. If people do fewer things at the same time, but instead work in a focused way on one thing at a time, they´ll end up doing more things in the same time period.

What to do now?

The climate crisis and the need for an energy transition take a back seat to acute problems such as war, energy crises and inflation. While the problems actually reinforce each other and thus urgently require solutions…

We need to do more in a limited amount of time in order to find quicker solutions to the enormous challenges we face: the energy transition, climate adaptation and the Dutch V&R challenge, for instance. A root cause analysis is then a good first step.

Already several organisations did a root cause analysis with us. The people we worked with are happy to share their experiences with you. You can contact us in the usual ways. We look forward to talking to you.